TIPS FOR WILDLIFE VIEWING IN UGANDA 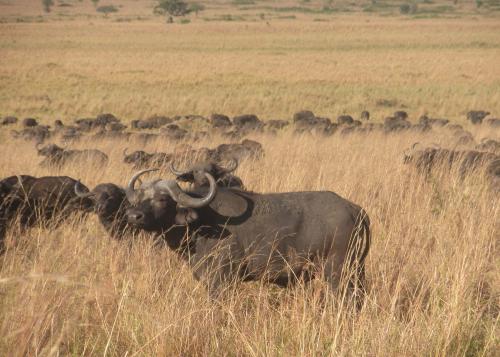 Wildlife viewing in Uganda gives you an opportunity to enjoy the attention and input of one or more guide whose job is to make sure that one is safe; it’s fun and enlightening experience.

The Safari one enjoys the attention and input of one or more guides whose job is to make sure that one is safe, fun and enlightened experience. However one has capable hands   before setting off, this more of your adventure.

Your desire to visit Uganda for wildlife destination country has been triggered. It’s very well but one shouldn’t expect to see everything in the way films do.

The best wildlife films take a lot of years to be created and may involve weeks or months of waiting for action to happen. Enjoy your safari with realistic expectation, and always remember wildlife is wild. This is with exception of common birds and herbivorous mammals, there is no wild guaranteed they keep moving from area to area and that’s the best thrilling moment to get up early   each morning and drive around.

It’s very important to develop a good relationship with your guide from outset. The guide may not know the area and its wildlife so well but the best way is to reveal to you.

Never get shy to get involved in everyday routine, after seeing enough of lions for a day, for example let the guide how much you would like to see other species of mammals, birds, trees and many more.

Spend the whole safari charging about looking for big games, aim to get an understanding whole ecosystem this is where termites play a big role as lions and elephants.

Develop interests in reptiles, birds and trees this means captivating new experiences all the time.

Have sensitivity towards the wildlife. The guide will always know the correct distance to approach each individual species without any stress caused, this may not happen in some areas of dictate distance.

The wildlife encounters are often animals one is viewing and unaware or unafraid. Safaris put one at risk than one would be travelling on busy road   in neighborhood; animals are dangerous and simple precautions.

A good guide will naturally avert any risky situation, which has mentioned, thus respecting animals’ space by not attempting to get too close as paramount.

Large mammals are frightened of humans they runoff when confronted with the upright form of a person; however this can never be taken for granted. One shouldn’t be tempted to leave the safety of a safari vehicle to approach an animal.

It’s advised to remain seated while on safari in an open safari vehicle, because lions appear to regard safari vehicle as one entity, rather than a collection of edible primates. The best lodges are not fenced and they allow free movements of all wildlife, expect to be escorted to and from your room or tent after dinner by the armed guard.

Some of the large animals at night can explore the lodge surroundings after dark, but during the daylight hours they keep well clear.

Some of the exceptions mammals include impala, elephants, bushbuck and herbivores these realize that the lodge offers protection from predators.  The velvet Monkeys ,baboons also frequently raid Kitchens and table fruits ,Sometimes they become aggressive they are accustomed to handouts, the rule is never to find them.

Naturally, people will want to record their safari. Carry your valuables with you or put them a room which is safe.

Use your four fingers with your palm facing downwards to call out a person, instead of signaling with an index finger. During daytime wildlife game viewing safari activities, one is supposed to wear colors that blend in with the surroundings such as (tan, light green, brown or Khaki).

One is advised not to wear perfumes while viewing games, the unnatural smells for miles and unnatural colors for hundreds of yards; they make a close approach very difficult.

Tourists are in a small number for those who get hurt on a safari they are almost travelers who ignore the laws of nature and probably advice and warnings of their guides; one should use enough of their common sense.

Swimming in rivers, lakes or streams is not allowed unless one is certain they are free of crocodiles, hippos and bilharzias (snail borne disease) the first areas of the river are free of bilharzias however they are still risky.

Bilharzia can be easily cured once immediate report is given.

One shouldn’t move along rivers near dawn, dust or at night. For those who will do so they might end up in a hippo’s path well it’s going to its waterhole and the hippo may charge. Due to dangers of crocodiles one is not advised to walk close to the edges of a river or lake.

Malaria is present in almost all the parks and reserves the bills shouldn’t be taken and prescribed by a physician in one’s country.

Mosquitoes usually come out from dusk until dawn this period one should use mosquito repellent and wear long pants along sleeve shirt or blouse, shoes and socks.

The thorns and sharp twigs, one should wear closed-toed shoes or boots at night and during day time while entering the bush, bring a flash light with you at night.

A Tourist you’re advised not to move around the lodge or camp without a guide, especially during the night, dawn or dusk. Remember wildlife roam freely in and around the lodges.

The temptation to walk or jog alone in the national park, reserves or areas of wildlife exists.

Your trip to Uganda or any country has to be bucket list since a little time which is about things in place to go on adventure.

Plan in advance for prioritize animals that are badly  want to see and let ones guides to tour to know about the country.

Touring different parks in the country will wipe out your budget. Plan for   your tour   to visit the game park giving you a chance   to see the greatest variety of wildlife.

Animals are active during morning and evening hours, most times it’s hot which makes animals to hide during mid-day hours.

Wildlife viewing are best  in  morning and evenings hours as they come out to roam from their hideouts and as they run to their hideouts, it’s very exciting moment to spot out the big 5 such as Rhinos, Buffaloes, Leopards, lions and elephants. They are called the big five

Animals are active in the morning and evening, as usually hot in Africa they come out at mid-day hours. It’s very exciting to see the big 5 such as Buffaloes, Rhinoes, Leopards, lions and elephants. The animals are called the big five because they were most prized trophies of hunters years ago.

Safaris one is able to learn from the experience one meets but not only fixing their eyes for the big 5 as one might be disappointed.

Do not use flash lights well taking pictures animals might take charge or get scared of you  hence hiding and not come close for portrait, it’s better to be ready with no flash cameras to take pictures in order to have something to take away with you for your memories.

One shouldn’t move out of the car well your infield unless in a safe designated area or with an armed ranger present. Remember its wild don’t mess with wildlife, don’t be surprised when you get eaten by a lion as you try to get close to it. Keep distance well near the animals and when in your vehicle your windows must be rolled up. Be ready for amazing game drive which is usually in the morning or evening hours.

These have more of mammals and bird species than any other park in Uganda. Queen Elizabeth offers the greatest variety however Murchison falls national park offers larger mammals in greater concentration such as a big number of giraffes which are not found in Queen Elizabeth. All these national parks have buffaloes, elephants, hippos, kobs, bushbucks however it’s not easy to spot out the predators just like of it you will have a chance to see leopards, lions.

Wildlife at Lake Mburo is popular because this is the only place in the south with Zebras and elands.  The beauties of wildlife can be found in seldom-visited Kidepo valley, this offers the chance to see ostriches, cheetahs, Kudus, bat-eared foxes and other animals that are found in no other part of Uganda.

Game drives are available in Toro Semiliki wildlife Reserve, although most people come here for chimpanzee.

Where one drives and seek, taking UWA rangers-guide who are well informed and encounter great wildlife.

Advantages to driving these include covering the group and getting closer  to the animals however there is nothing that beats stalking animals on foot, however one can do this in a company of armed ranger guide in all the parks that are mentioned above except Murchison falls, bird watching and Gorilla and chimp tracking which takes place on foot.

Gorilla tracking is one of the major attractions in Uganda. Gorillas are giant intelligent Mountain Gorillas inhabiting the two national parks in Uganda these include Mgahinga national and Bwindi impenetrable.

The main one is kyambura Gorge in queen Elizabeth National park, Kibale Forest National Park, Budongo Forest Reserve which is part of Murchison falls National Park. When visiting Uganda you might a good option of Toro-Semiliki Wildlife Reserve. It often offers the best viewing   savannahs around. However the troop is private at kigaju forest which is yet to be habituated. This is far cheapest place to spot k out chimpanzees.

The half habituation troop in Kalinzu Forest Reserve which is near  Queen Elizabeth National park which is found half the time.

The trekking of the Gorillas one needs to spend about 30 minutes to one hour  with humans as they  carry out their day to day activities such as  climbing trees, building night use nests, playing and grooming each other and many more.

The trekking of mountain Gorillas takes place in Bwindi Impenetrable National park and Mgahinga National Park where Gold meets silver (sliver Gorillas and black and Gold monkeys).Gorilla trekking one is supposed to spend 30 minutes to 1 hour with humans as well as trekking goes for 30 minutes to 6 hours trekking through the forest as trekkers can have a chance to spot a number of different trees, birds, types of mushrooms, primates and many more, it’s an amazing adventure in the wildness.

After the trekking and seeing the Mountain Gorillas  as they feed, build nests for night use, play, groom each other and many more. You will be given one hour to have your lunch in the forest that happens only if you see the mountain Gorillas before lunch time.

Uganda is one of the best areas for bird watchers, a great destination offering about 1000 species of birds which is half of the total that’s found in Africa.

Bird watchers are enthralled by diversity of beauty among Uganda’s bird life. Uganda as a country has unique geographical position, where eastern, northern, southern and western ranges merge ,this allows visitors to have the best view 24 Albertine rift endemics in Semuliki National park  just the same trip as dry season eastern specials and red-billed in Kidepo valley National.

The country’s top guides are the best members of the  Uganda Bird Guides .Bird Uganda has very many detailed site reports for all National parks and very many other hot-spots.

Book your Air Ticket with us for the best Fare. We are IATA and TUGATA Members.

Book your Air Ticket with us for the best Fare. We are IATA and TUGATA Members.